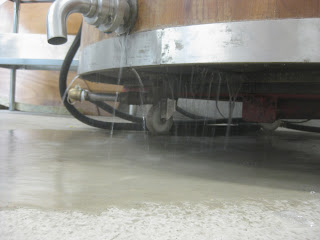 It has been a long time since I posted anything. Lots of thing have happened in the creamery, I could have written a lot and posted a lot of pictures about all the developments. In fact, the creamery is almost done. Next week I will have a final inspection from the inspectors of Agriculture and Markets of NYS. This should be not more than a formality since they were over just last week. I had asked for them to come for a preliminary final inspection so they could tell me what I needed to change or add to finalize the setup. I didn't have to change anything, I just had to get a few things. They wanted to see the milk cans I will be using to collect the milk in. I had just ordered them the previous week and they would be arriving in a few days or so. Beside this they wanted to see some cleaning supplies, brine tanks and a spring on the toilet door. All this is easily done by next Friday.

Although they had already seen it before, they wanted to see the vat again, especially the inside. But I had turned it upside down. Early in the week I had ran water for the first time into the jacket. And lo and behold, it leaked like a sieve. I was bumped out even though I had anticipated this. The vat had been sitting dry for such a long time and I suspected that the wood had shrunk and had lost its ability to hold water. I tried not to worry too much. I remembered from when I was young we had wooden rain barrels. When they arrived they would hardly hold any water but after being soaked for a few days, they would be waterproof.
I sent an email with some pictures to the fabricator in the Netherlands. It being late in the day at this side of the Ocean, I didn't expect a reply until next morning. And indeed as I expected, the maker suspected the wood to have shrunk after such a long period of sitting dry. He recommended turning the vat upside down and pouring water on the bottom. The underside of the wood was not sealed so the wood could absorb the water and the wood would swell.
It has been sitting upside down for several days and it seems that the water has done the trick. The floor under the vat stays dry and the film of water on the vat isn't decreasing. Next week I will turn it back on its feet again. Ready to be inspected. 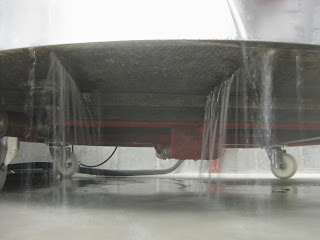 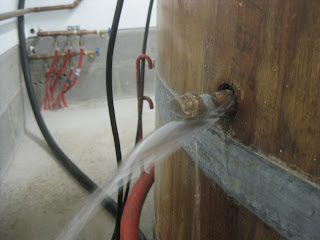 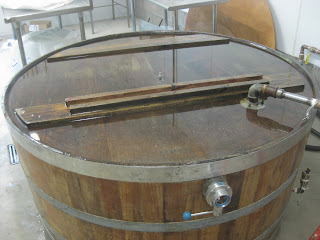 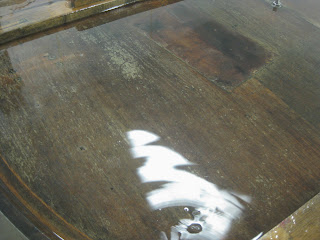