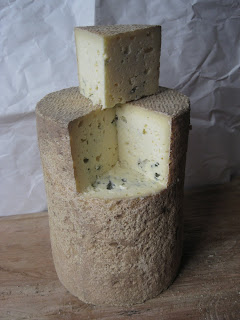 This is a cheese I have been agonizing about. I made this cheese early July after recipe for Devon Blue. I had gathered information from various sources about the make procedure for this cheese and was confident that I had a good recipe.
I made two wheels. A small wheel of three pound and the one in the picture, which weighs about seven pound. The smaller one was wonderful. It was moist, buttery and nutty, full of intense flavors. It was gone in no time. My French friend said that it reminded her of the Blue de Gex we had in France. I was very pleased with this likening and took it as a great complement.
The smaller one had gone into the aging room after the salting procedure. But because I was aging cheeses in a refrigerator, there was not enough room for the larger one. So it sat in my apartment in the sweltering heat for at least two weeks. I was convinced that the cheese would be a dry crumbly disaster. Despite my fear, the cheese turned out alright. Although not as moist and buttery as the smaller wheel and lacking the intensity of flavors, it is still a good blue cheese. 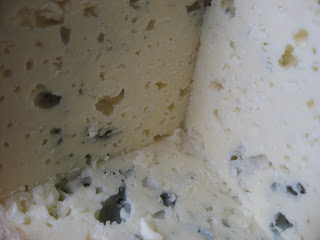 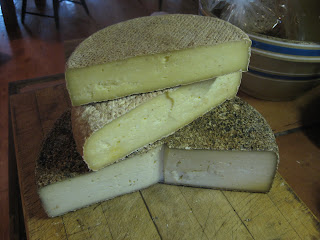 Here are some cheeses I made a while ago. The two on top are tommes I made in June and the one below is an  Alpine style cheese made in January. It is striking how different the colors are. The tommes are yellow from the cows being out on pasture while the Alpine is pale because the cows were indoors, fed on hay. 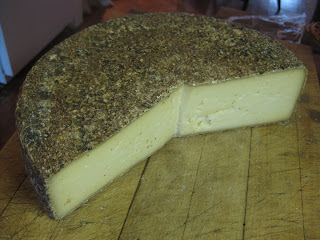