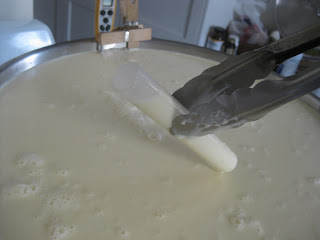 I haven't made an alpine style cheese for a while. The last one I made was in April, batch 165. The reason being is plural. It is not a cheese which I can make when I don't have a lot of time. I find it requires more concentration and focus than other styles which I am more familiar with. Especially the pH targets are critical in this cheese. The last two wheels I had cut into weren't of the best quality. They were too dry and crumbly due to missed pH targets. The flavor profile was not that bad, they were sweet and nutty but did have a sharpness to it which I considered a major defect. Apart from this, I find the pressing procedure cumbersome, the wrapping in cheesecloth, the turning and wrapping again etcetera. Added to this the fact that it takes a longer time to test the results, gives me enough reasons to opt out and make another style of cheese.
However, I do like alpine style cheeses and I am planning to make them once I have the creamery ready. It seems like is a good cheese to have in the repertoire because of its storage ability and flexibility in marketing.
About a week ago I cored two wheels with the trier which I had made at the end of last year. They were much better, the texture resembled more what I have been looking for. This gave me new courage to try another alpine style of which here are some images of the procedure
In the first picture I am taking a milk sample to do a lactic test. I was taught to do this by Peter Dixon. This test will give me a rough idea of the cleanliness of the milk. It is a very simple procedure. You fill a sterile test tube with milk of 70F to which no culture starter has been added. To sterilize the test tube, I boil them for about 5 minutes. You keep the tube with the the milk at room temperature for two days at which time a lactic coagulation will have occurred. The resulting curd will tell how clean the milk is. If the curd is solid without any disturbances, voids or gas bubbles, the milk is very clean. The more disturbances, voids or gas bubbles, the less clean is the milk. Lately, the milk I use has been very consistently clean as one can see in the picture below. The tube to the right is the one I just filled but the tubes next to it are filled with curds from my last two makes which were respectively two weeks and four weeks ago.
In the next image, I am adding the starter culture to the milk which is at 70F. I use 1/4 tsp of TA60 (Streptococcus Salivarius Thermophilus), the same amount of LH100 (Lactobacillus Helveticus) and 1/16 tsp Propionic bacteria to 10 gallon of raw Jersey milk. It took about 10 more minutes to raise the temperature to 90F at which time I added 5.5 ml of microbial rennet. To determine the flocculation time, I use the spinning bowl procedure. One floats a bowl on the surface of the milk and make it spin every once in a while. As soon as the bowl doesn't want to spin anymore, flocculation has set in and the time between adding the rennet to this moment is called the flocculation time. For this type of cheese, I use a factor of 2 to determine when it is time to cut the curd. The flocculation time was 12 minutes, times 2 makes 24 minutes, which brings us to the next picture. It takes about three minutes to cut the curd to rice size pieces after which I heal the mass for 10 minutes. This means let it be undisturbed so that the small curd pieces can heal their skin.
The next step is cooking the curd. I gradually raise the temperature to 114F over about 40 minutes, making sure that especially the first 5 minutes don't go too fast as not to shock the curds. After this cooking procedure I let the curds heal again for 10 minutes before I drain most of the whey. At drainage the pH of the whey is 6.54. I think I am on target. (Never mind the value shown in picture with the pH meter, this was taken at a different stage).
Next, the curds are being pressed. I have captured them in a linen cheesecloth. I like to do the first pressing in rough woven cloth to enhance the draining, hench the linen. After I turn it once or twice I change the cloth into a finer cotton weave. I leave the cheese in the press overnight. In the meantime I have made some ricotta from the whey which, while draining, functions as a pressing weight.
By the time I remove the cheese from the press, the pH has dropped to 5.44. I think I am good. All is left the salting. I brine the cheese in saturated brine for 30 hours, roughly 3 hours per pound.
Now it is just waiting for 6 months to see whether I succeeded in making an acceptable alpine style cheese. 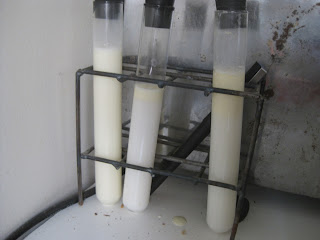 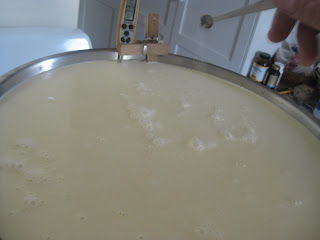 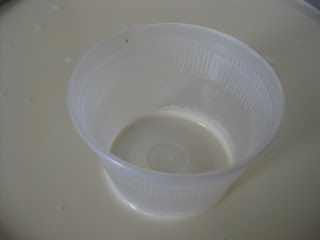 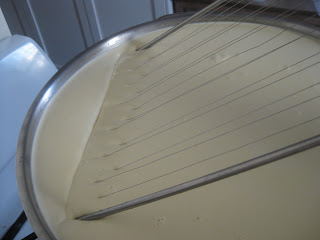 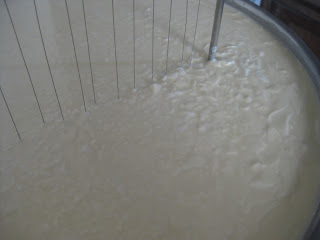 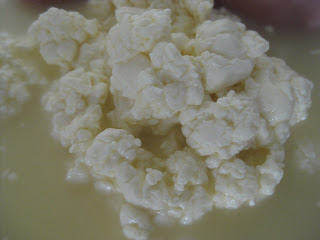 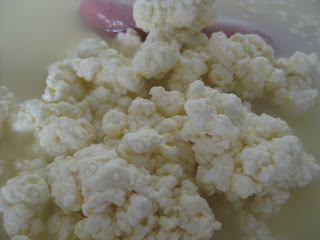 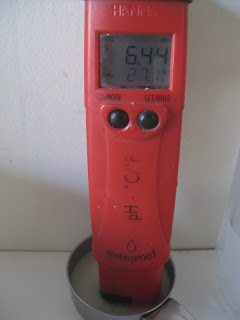 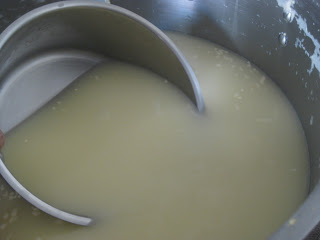 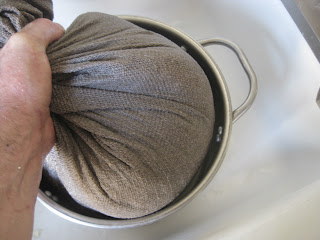 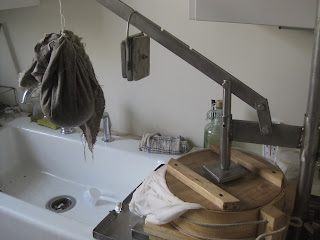 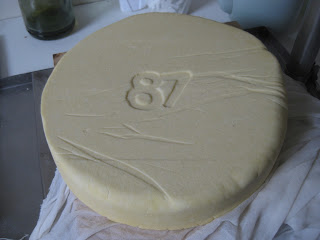 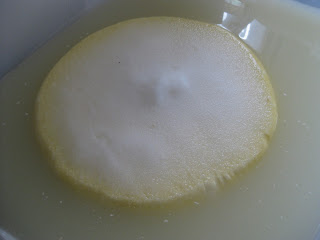