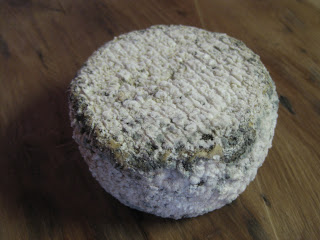 Every time when I make a batch of semi-lactic cheese, the cream starts to rise to the top. By the time the curd is ready to be ladled into the moulds, there is a thick layer of cream on top. Especially this time of year when the solids in the milk are high. Lately I have been experimenting with another procedure. I let the milk acidify to a pH of 6.2-6.0 before I add a few drops of rennet. At this time I stir the milk, distributing the fat globules, which are already on top, back into the milk. By adding the rennet only at this pH level, the time it takes for the milk to coagulate should be short enough to prevent the fat particles to rise to the top.
So far, I have not mastered this procedure. Only one time I had some success. Hardly any cream was floating on top. Granted, this was when I used Ayrshire milk. The fat globules in this milk are small and less likely to rise. It is much harder to achieve with Jersey milk of which the fat globules are rather large.
In the past I used to scoop the cream from the top and used it as creme freche. Lately I have ladled it into the moulds and drained it with the rest the curds. This has resulted in some delicious triple or perhaps even quadruple cream cheeses. Yum... 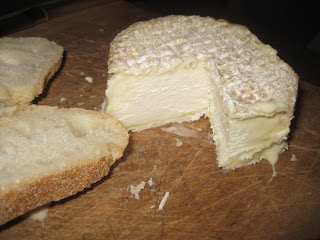 A big British cheese in France

A few days ago I received these two clippings about Patrick Rance in the mail. They were sent by my father-in-law, Michael, in London who has been going through his papers. My wife has been pressuring him to sort them out. Michael has never thrown away much as is evident in these two clippings. The first clipping is from the Observer, dated Sunday 3 September 1989. It is a review of Patrick Rance's "The French Cheese Book" by Jane Grigson. The second clipping, from The Independent of Wednesday 25 April 1990, is an announcement of the Glenfiddich Tropy awarded to major Rance.
I suppose the reason he kept these clippings is that his cousin Janet was married to Patrick Rance. Janet was my wife's godmother and when I got interested in cheese three years ago, my wife told me about Patrick and how he was a cheese maven. She told me about Janet and Pat and how she spent time in their home and cheese shop in Streatley. She told me how one could enter the house through the shop and see mounds of cheese, but--a teenager then--my wife was otherwise preoccupied.
When she first told me about Patrick Rance, it didn't really register. I thought he was just another cheese seller. Not until I got hold of his books, in particular "The French Cheese Book", did I realize the height of his stature. I have read this book several times and we have used it as a travel guide through France. When my wife was spending time in Streatley, she had no idea what legacy was being built in that little cheese shop, neither had she any idea what part cheese was to play in her life. 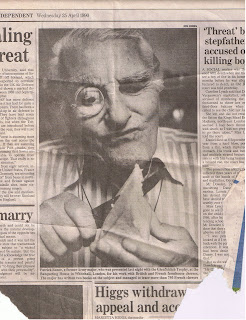